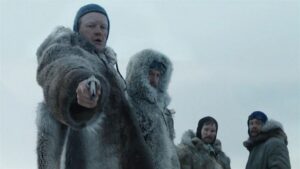 A narrative film portrait of the adventurer, who filled in the blanks on the map, conquered the South Pole and was the first to reach both poles of the globe with his expeditions. Anyway, what was Roald Amundsen really like? The film does not show only expeditions to unexplored icy wastelands and oceans and polar airship flights, but reveals also the life and personality of the legendary discoverer, including a number of lesser-known facts such as Roald’s relationship to his brother, or his love affairs. Director Espen Sandberg, who shot Kon-Tiki or the last Pirates of the Caribbean, is not afraid to portray Amundsen’s darker pages. The film was partly shot in Prague.